A painful problem that in one way or another worries all the inhabitants and guests of the city of Edinet are the homeless animals: there are a large number of stray dogs in the city, who, losing in herds and gaining ground in a certain place, harass. passers-by.

“I fell on the sidewalk, I started screaming”

On May 4, a 79-year-old woman walking by the city high school named. V. Sukhomlinsky, attacked by a dog. “She was a bitch in the breast. She quietly approached from behind and grabbed my heel with her teeth. I was wearing slippers that did not protect my foot from being bitten. “I fell on the sidewalk, I started screaming, but the dog did not stay behind, it tore my leg with its teeth and there was no one on the street who could help me,” says Maria. 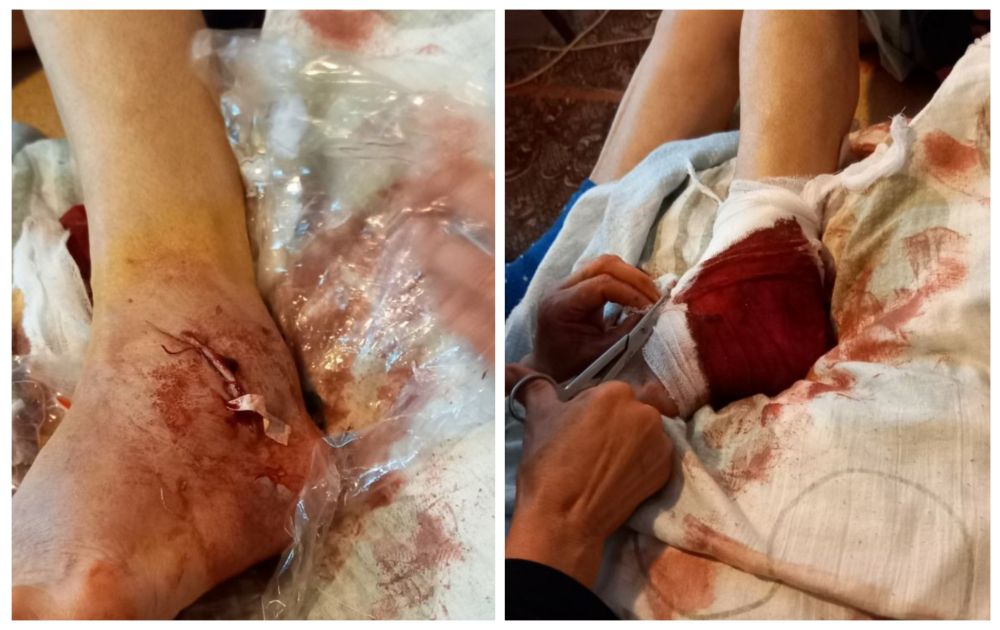 The woman was seriously injured.

“I do not have a cell phone, I had to go home, leaving traces of blood. Already at home, I called an ambulance, they took me to the hospital, where they did stitches. I have been treating my leg for more than a month. About 600 lei had to be spent on medication: bandages, betadine, hydrogen peroxide, painkillers, money for a taxi to go to the doctor. Talking to friends, I learned that this dog literally teases the whole microdistrict: it has bitten me more than once, but more often attacks lone passers-by, the woman said. 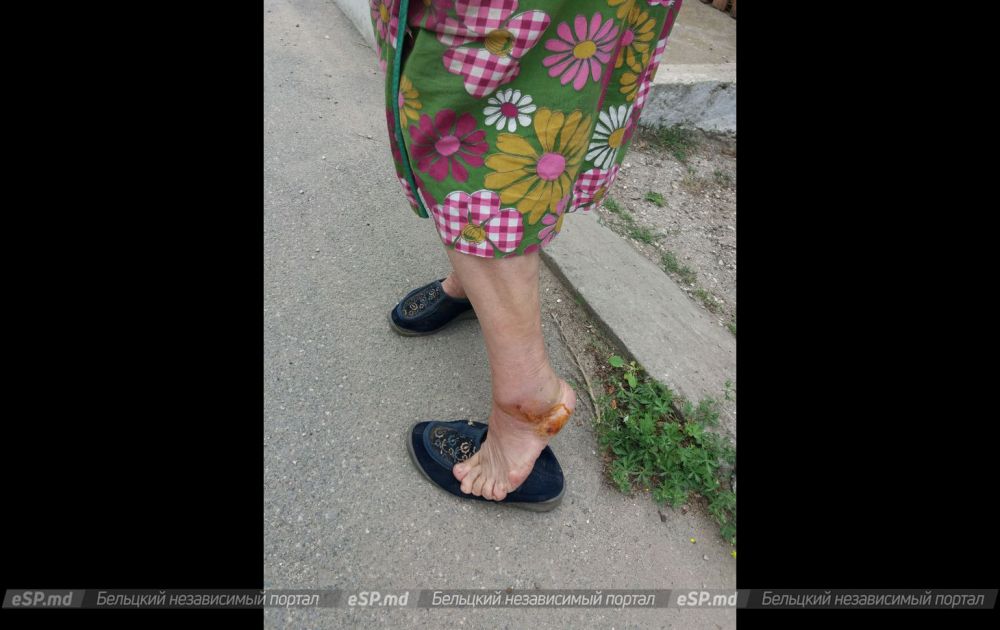 The wound has not yet healed.

Svetlana and Olga, who live not far from where the dog bit Maria, said that this dog lived in the yard of an abandoned house for a long time: “the owners did not live in it for a long time, but she “She has been living here for several years and now she is raising puppies. She is very aggressive and we try not to walk this path.”

“There is no funding for the construction of a shelter”

Indeed, in the city you can meet hundreds of dogs left abandoned and hungry. However, some of them pose a real threat. Animals attack people who pass by and bite.

When asked how the city leadership sees the problem, we addressed the mayor of Edinet, Constantin Cojocari.

– I understand very well that stray animals in the city are a serious problem. The mayor has already drafted a project for the construction of a homeless animal shelter worth about half a million euros, and has even selected a construction site. However, we currently do not have sufficient funds to implement it. The city administration is looking for potential donors. In previous years, although an inhuman solution to this issue, but still a possible means of dealing with problematic dogs and increasing the number of stray animals was hunting. Now this measure is banned and, alas, no other option has been proposed to combat stray dogs. In addition, we do not even have special machinery and equipment for catching and transporting animals. True, the city leadership is considering buying trap cages (dog traps), but so far this question remains open.

That is, local authorities do not have the necessary tools to protect citizens from the attack of stray animals. But can victims file a complaint with law enforcement agencies and the court?

– They can. And we understand that we will have to respond. The problem of attacks by stray animals is great and not only in Edinet. This is the cornerstone of a barrier in every locality in Moldova. I admit that today we can not influence the situation in any way. Bringing the stray animal problem is the right thing to do, and let’s be honest: most of the cats and dogs found on the street had been domesticated before. The residents themselves are often blamed for the increase in the number of stray animals. Therefore, taking the opportunity, I want to appeal to everyone: do not throw animals, do not bring “pig in a bag” from the villages to the city. Be more responsible.

Sergey Morari, a rabiologist involved in the study, fight and prevention of rabies, told us about the dangers associated with biting humans by animals.

– Cases when dogs attack a person are not uncommon in our country. In 2021, 73 cases of a human being being bitten by a dog were recorded in Edinet County. Of the total number of people bitten, 15 are children. In 2022, 34 dogs affected by teeth were addressed to us, of which 6 are minors.
There are many dangers from animal bites. This is a nerve concussion, concussion, wound – there are many and quite deep. But this is not the worst thing that can happen to a bite.

It is important to understand that the animal may be sick. Of particular danger are the bites of rabid dogs. Rabies is a contagious disease caused by a virus that is transmitted through saliva through the bite of sick animals. Infection is also possible when contaminated saliva enters the skin and mucous membranes, through scratches and other injuries. In this case, it is very important, without wasting time, to go to the first aid measures (in no case should you postpone a visit to a rabiologist):

Regardless of whether the actions taken were successful, the bleeding stopped or not, it is necessary to go to the doctor as soon as possible. In this case, it is desirable to know the following information: a description of the animal, appearance and behavior, the presence of a collar, the circumstances of the bite.

Next, you need to do a vaccination course. No one has done 40 injections in the stomach for a long time, the patient will be vaccinated and allowed to go home.

There is no cure for rage. However, there is a way to prevent the disease – this is a specific method of prevention – the introduction of a special rabies vaccine no later than the 14th day from the moment of the bite. All those who come to us with animal bites are vaccinated 5 times: on the day of infection (or treatment), then on the 3rd, 7th, 14th and 28th day. Therapy may be discontinued if the animal is found to remain healthy within the 10-day period, or if the animal does not have rabies virus.

“It is important to reduce the number of stray animals”

Anatoly Tsybulko, head of the sanitary and veterinary supervision department of the Edinet Territorial Office of the National Food Safety Agency (ANSA), said that in the Edinet region no case of rabies was registered in 2022, while in 2021 there was 1 case of infection rabies in a fox.

Which animals are most likely to be infected by rabies?

Everyone is hot-tempered. The bite of a dog, cat, squirrel, rat – any animal can lead to death if a person is not vaccinated in time. Therefore, as long as there is no comprehensive information on the status of the animal (sick / healthy), each bitten person should report the incident and seek medical attention.

– Are there any measures to prevent rabies for wildlife (forest, field)?

– The National Animal Welfare Plan provides preventive measures for oral vaccination. Every year, at a certain period, our employees distribute the added vaccine to food in places with a large concentration of wildlife: in places where foxes, dogs and baldos live. This is bearing fruit, however, it is clear that this type of vaccination can not cover 100% of untamed animals.

– We are talking about animals that live outside the settlements. How to deal with the rabies virus in the city?

“It is important to minimize the number of homeless animals. And the responsibility for the bites according to law 426 of 27 October 2007 “On the adoption of rules for keeping pets” is placed on the owners, and on the situation in the village – local authorities. I am sure it is impossible to influence the situation quickly, but over time it is possible to achieve certain results by having a small dog shelter in the city equipped with a medical office to perform an operation to sterilize animals. .

“Sometimes it’s scary to walk on the street”

Here’s what people say about this issue.

There are dogs I feed. With me they are very contact, with others – no. For example, some moan to the drunkards, others to the weak, but I have never seen them try to bite. Last year I witnessed a situation where 10-12 year old boys were stoning a dog. Then I stood between them and told them to throw me. The children calmed down immediately and it turned out that the parents just did not explain that the animal also had pain, Tatyana shared her opinion.

– I noticed that animals in herds behave more aggressively. Somehow the dogs attacked me. I was not at a loss and leaned on a rock to scare them, but one of them, a large dog, trying to bite my hand, hung on my coat, tore my sleeve. “The coat is damaged, there is no one to repair the damage,” said Olga.

Another Edinet resident, Svetlana, said there are so many animals that it is sometimes scary to walk down the street: “There is a big garbage dump in the area next to the Family supermarket. There lives a whole herd of dogs, consisting of 12 -15 individuals.Sometimes it is simply impossible to cross: it is scary, I myself saw how they rushed to people, but I did not hear about the bites.

Photo by the author

We use cookies to ensure that we give you the best experience on our website. If you continue to use this site we will assume that you are happy with it.OkPrivacy policy