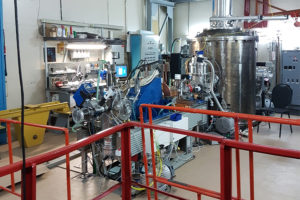 As part of the experiment, 15 cats and dogs with malignant tumors were treated. The irradiation procedure lasted an average of two hours. Shortly before the radiation started, the animals were injected with a drug for the targeted distribution of boron, then they were put into drug-induced sleep and fixed under an accelerator. During irradiation, the main physiological parameters of the animals were monitored.

– It can be said that the effect of BNCT was obtained not only in cell cultures and laboratory rats, but also in large mammals – cats and dogs, and later, perhaps, in rabbits and pigs. In a broad sense, this is a mandatory stage in the introduction of BNCT technologies in medical practice “, commented the author of the study, the head of the Laboratory of Nuclear and Innovative Medicine of the Faculty of Physics, NSU, Candidate of Medical Sciences Vladimir. Kanygin.

The scientist noted that cats and dogs tend to develop similar types of cancer in the same organs as humans. Moreover, biological and therapeutic responses to tumors in pets are better models of human tissue responses than those of small rodents. Thus, the study is key in testing BNCT technologies before the clinical phase.

Scientists claim to have solved the problem of creating a neutron source suitable for therapy and now the maximum they can do is systematic treatment of animals.

In Russia, a state program has been launched to transfer the accelerator neutron source built into the INP SB RAS to the clinical stage. In 2023-2024, the Institute’s specialists will produce and supply the resource to the Federal State Budget Institution, the National Center for Oncology Medical Research under the name NNNN Blokhin ”for BNCT preclinical and clinical trials.

Boron neutron capture (BNCT) therapy is a method of selective destruction of malignant tumor cells by accumulating the boron-10 isotope in them and subsequent neutron beam irradiation. During the interaction of boron and a neutron, a nuclear reaction occurs, in which high-energy particles (an alpha particle and an atomic lithium nucleus) are formed. They travel short distances (5-9 microns, which is comparable to the diameter of a mammalian cell) and cause fatal damage to tumor cells without affecting healthy ones.

Earlier, the editors reported that the Prime Minister of the Russian Federation, after a visit to Novosibirsk, ordered to support the development of boron-neutron capture therapy for oncological diseases in Russia.